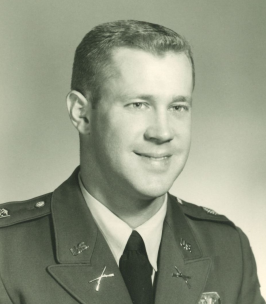 Marvin Ira Elkins took his last earthly breath on March 29, 2022 at 10:37 p.m. Marvin was born on May 19th, 1937 to Ruby (Mann) and Ira Elkins in Kansas City, Missouri. He graduated from Springdale High School Class of ’55 and while there he was an exceptional football player, playing offense and defense in the same games! He was in the ROTC and a graduate of the University of Arkansas (GO HOGS)! After graduating he entered flight school and joined the Army 82nd Airborne flying helicopters in Vietnam. When his tour of duty was over, he continued his love of flying as a civilian. As a geologist, Marvin went to work for EXXON in the real estate department. He traveled around the globe while working for EXXON. He retired at 55 and he had a wonderful life, enjoying great health he could do the things he loved to do such as flying, fishing, dancing and cruising with Betty his love of 17 years. He also loved to play golf, as long as he didn’t have to rind in a cart! He made time almost every winter to go south to find the greens and sunshine.

Marvin was a God fearing and God loving man. He was a member of Southeast Christian Church but also enjoyed the Pentecostal preaching of Jimmy Swaggart and son. He also had been an Elder at the Springdale Presbyterian Church.

Marvin was preceded in death by his parents and a brother, Clyde Jerome (Jerry) Elkins.

Marvin is and will be forever missed by his sweetheart, Betty Pettyjohn and her children; daughter, Debra Sine (Bill), Marvin always referred to her as the “second most beautiful woman he ever met” and Bill as “Mr. Muscles.” Son, “the son he never had” Damon Kelty (Kim).

Visitation will be at 1 p.m. and the funeral service at 2 p.m. on Tuesday, April 12, 2022 at the Hardwicke Funeral Home Chapel at 509 W. Main, Clarksville, AR. After the service, Marvin will be laid to rest next to his mother and father at Harmony Cemetery, Clarksville, AR.

In Louisville a celebration of Marvin’s life will be held at O’Charlies on Dixie Highway, Shively at 1 p.m. on April 20th.

Flowers are beautiful, but Marvin would prefer a donation be made instead to Kosair Children’s Hospital at 231 Chestnut St. in Louisville, Kentucky 40202.