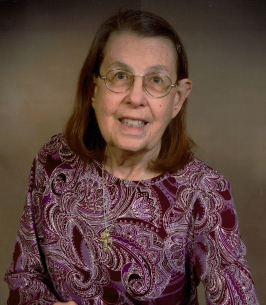 Jean Fields Smith of Clarksville, AR was born in Pittsburgh PA on April 5, 1941, to Charles V. and Doris H. Fields. Lois Jean passed away on December 22, 2021, at age 80. A resident of Churchill Borough, she attended Wilkinsburg High School and in 1963 earned a BA in History at Juniata College. She became familiar with computers working at the High-Altitude Observatory and met Gary E. Smith while taking graduate courses at the University of Colorado. Jean and Gary married in Boulder, CO on January 30, 1965, and spent the next few years in San Antonio, TX where Gary served in the Air Force.

Gary’s career took the family to the Washington, DC area where they settled in Greenbelt. Being a homemaker and raising two daughters was Jean’s love. She volunteered with the Girl Scouts, produced puppet shows with Gary, and played clarinet. An early adopter of technology, Jean bought an Apple IIc to create mimeograph masters to print programs for the Greenbelt Concert Band.

Subsequently earning a BS in Math Education and widowed in 1985, Jean found employment teaching math to home-bound students. Later she served as an administrative assistant, first at Foundry United Methodist Church and then at the University of Maryland.

In 1992, Jean moved to Clarksville, AR, a college town that reminded her of the rolling hills of western Pennsylvania of her childhood. Having converted to Catholicism in 1991, Jean endeavored to learn Spanish to befriend Spanish-speaking members of her new church. For many years she was active with the choir and was a regular reader at weekday masses. Jean also built relationships with international students at the University of the Ozarks.

Jean loved flowering plants and enjoyed taking pictures of beautiful scenery. She listened to audio books and was proficient at handwork such as sewing, knitting and crocheting. In the last few years, she especially enjoyed annual vacations to national parks, cities, and other attractions with her daughter Cathy.

Persevering and courageous to the end, her greatest desire was to be a friend to all. She is survived by her younger brother John Fields in Bixby, OK, her daughters Wendy Smith Burch (Jeff) and Cathy Smith in Maryland, and by grandchildren Benjamin, Stephanie, and Jasper.

A funeral mass will be held at Subiaco Abby on Thursday January 6, 2022, at 1pm. Her ashes will be interned at Arlington National Cemetery with husband, Gary.

In lieu of flowers, donations can be made to Focus on the Family (https://www.focusonthefamily.com) or Holy Redeemer Catholic Church (https://hrclarksville.org).

The Funeral Mass will be lived streamed by Subiaco Academy Network on livestream.com at
http://livestream.com/Subiaco/events/10046085