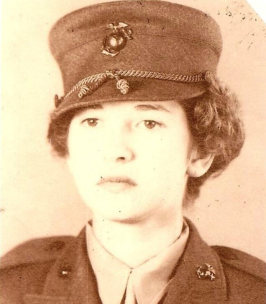 There are good conversationalists, and then, there are good storytellers. Charlton Heston and Grandma Carma were the latter. Carma Frances (Eubanks) Olson was born in 1932 in Mena, Arkansas. She grew up in Mena, Magazine, and Oregon. She grew up during the Great Depression and the WWII era as an American patriot. She had one brother, Jim, one sister, Sally, and one Uncle Buddy who was nine years older, and grew up right alongside her. She finished high school graduating in May of 1950. She joined the U.S. Marine Corps in January 1951, after her eighteenth birthday. She had a Semper Fi spirit that would make any Marine proud! She loved serving in the Marine Corps, but eventually, she began the adventure of having a family of her own. Her pride and joy were her son Mike, her daughter Missy and son-in-law Dale, and all her six granddaughters and seventeen great-grandchildren! She earned her Bachelor of Education degree. She decided after substitute teaching to become a nurse instead. She worked as an LPN for many years before retiring. She also maintained a few rental properties and a Hundred Acre Woods! In her spare time, she sewed all manner of things for friends and family, occasionally talked politics (but only for an hour or two at a time), shared a meal with anyone who came to visit and loved to stay busy doing chores or helping you with yours. She was gifted with a sewing machine and even worked professionally in Lady-Fair at Ratcliff, Arkansas. She was known in the community as THE Lady to buy a quilt from. We all love and appreciate her beautiful quilts. They keep us warm and warm our hearts!

Her gentleman friend, Mike Szabo, was her later in life soul-mate (even if he was a Yankee!). They shared a romance for ten years before Mike passed. She loved her Mike so very much! Grandma was always at the family functions smiling and telling stories! One of her favorite things to say was “family is so important” or “it would be fun to have a big family.” This showed because she rarely missed a family function! When she wasn’t sewing or doing chores, she passed the time reading the Bible and doing crossword puzzles. She grew up Lutheran, but she also attended Mass at the local Bonneville Catholic Church. She considered the doctrine of each church as an important part of whether she could be considered Lutheran or Catholic. She also attended Oark Baptist Church and was an honorary member there (She was really a closet Baptist and will be living in a Baptist neighborhood in Heaven!). She loved the Lord and looked to Jesus for Salvation, Healing, and Deliverance. She knew He was the way to Heaven, the Door to Salvation, and she trusted Him! She was a generous woman, and she shared her time and worldly wealth with her family, friends, and those in need. She was a great example of Proverbs 31:13-18, which reads: “She selects wool and flax and works with eager hands. (14) She is like the merchant ships, bringing her food from afar. (15) She gets up while it is still dark; she provides food for her family and portions for her servant girls. (16) She considers a field and buys it; out of her earnings, she plants a vineyard. (17) She sets about her work vigorously; her arms are strong for her tasks. (18) She sees that her trading is profitable, and her lamp does not go out at night.” Thank you, Lord for Grandma Carma!

Our Grandma Carma, we love you, and you will be missed! We will forever be moved by your “Semper Fi,” “Always Faithful,” love for us!

In lieu of flowers, please make a donation to the American Legion #109, Magazine, Arkansas 72943.